Something extraordinary happened yesterday in the world of rural broadband. The state of New York announced the winning bidders in Phase 3 of its rural broadband auction, and the largest winning bidder was – Verizon. The same Verizon that has for years eschewed rural service, sold off its rural networks, let its copper plant degrade, even refused to rebuild its network on Fire Island after Hurricane Sandy until the residents became hostile. Verizon bid on rural New York territories even after it had turned down FCC funding for those same territories. Two and a half years ago, the FCC tried to get Verizon to provide an anemic 10/1 Mbps internet service by throwing exclusive funding its way, and Verizon refused. Now, Verizon has agreed to build fiber networks in some of those same areas.

Change of heart? No. A better policy. The New York Broadband Office admirably ran an auction that will deliver to rural New Yorkers not 10/1 Mbps service, but 100 Mbps and 1 Gbps service. Kudos, too, to the Pai FCC, which assisted the New York auction by adding Connect America Fund (CAF) support, something that the Wheeler FCC had resisted. New York’s policy made economic sense to Verizon and the other bidders in the auction.

When I was at the FCC, the large telephone companies repeatedly told the staff and Commissioners that 4/1 Mbps was difficult in rural areas, 10/1 very difficult, and anything more was nigh impossible. Those of us who advocated for auctions as the method for distributing funds were told that auctions would take too long and would not work for rural broadband. Now, look at the results achieved by New York, which set high standards for its citizens. Gigabit service by the end of this year, not 10/1 Mbps by 2020 or 2025. New York now leads the nation in rural broadband.

New York will have spent $500 million of state funds on its program. Contrast that to a proposal circulating currently at the FCC to spend $540 million of federal funds, exclusive to telephone companies without any competitive element, to achieve 10/1 Mbps in some areas, 4/1 Mbps in other areas, best efforts in still other areas. This exclusive funding is part of the only program administered by the FCC not subject to competitive mechanisms. The E-rate, Lifeline, Health Care, and Telecommunications Relay Service programs all make use of competition to provide services. Not so the vast majority of the Connect America Fund. True, there will be a CAF auction later this year for $198 million of the $4.5 billion in annual CAF spending. There will also be a Mobility Fund auction for $450 million of the $4.5 billion. A start, to be sure, but when compared with New York’s results, it is too little, too timid, too slow. 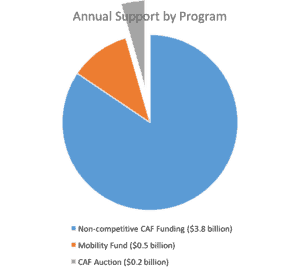 Just before I left the FCC, I had a conversation with the folks putting together the New York broadband program. It went something like this:

NY: Perhaps we could provide funding to Frontier and Verizon and the others to improve their service from 10/1 Mbps to 25/3 Mbps.

Me: Don’t do that. Put their unserved territories in the auction – even where the FCC gave them money.

NY: But they’ve said they wouldn’t bid in an auction.

By the third phase of the New York auction, Verizon, Frontier, Fairpoint, TDS and most of the telephone companies in the state bid for funding to construct fiber-to-the-home networks. Telephone companies who receive exclusive funding today from the FCC participated in an auction that included their territories. Instead of 10/1 Mbps, they all agreed to build fiber networks.  They participated, not just because of the funding, but because of the design of the New York broadband program. Policy matters.

One other thing. An electric cooperative also won. Otsego Electric, which serves the areas around Cooperstown will now be able to build a fiber network to its members and provide Gigabit service. As a baseball fan, it tickles me that I will have played a small part in bringing high quality internet service to the area around the Hall of Fame.

New York got this right. Now, the FCC has to decide whether it will continue to spend over $35 billion of the public’s money by committing that funding exclusively to incumbent telephone companies. Or, will the federal government use competitive bidding mechanisms. Can you hear rural America now FCC, Congress, NTIA, Department of Agriculture?

I have advocated for competitive bidding in rural telecom spending programs for twenty-five years. A few years ago, I was jokingly introduced at a conference as the Moses of rural broadband. It hasn’t yet been forty years, but now I have been to the mountaintop. I have seen the promised land. Hallelujah.

Jonathan has worked for over thirty years at start-up telecommunications companies and in the U.S. Government. Prior to joining Conexon, Jonathan served as Chief of the Office of Strategic Planning for the Federal Communications Commission. Jonathan was part of the senior leadership at the FCC that reformed $12 billion in annual federal spending, including the rural and high cost fund, e-rate, telecommunications relay services and the lifeline programs. For the majority of his career, Jonathan has worked with companies building broadband networks. Jonathan left the FCC to help electric cooperatives bring fiber-to-the-home (FTTH) broadband to rural areas throughout the country.