Let us suppose the FCC, during the RDOF long-form application reviews, follows the wishes of scores of Senators and House members “to validate that each provider in fact has the technical, financial, managerial, operational skills, capabilities, and resources to deliver the services that they have pledged.” Let us suppose further that a larger than usual number of providers default during the review. Then what?

Under the RDOF rules, there is no process to award the geographic areas to the next bidder in line. The geographic areas would remain unserved and unfunded until RDOF Phase 2, which may take place next year or the following year or not at all. Without a change to RDOF, such areas may remain unserved for another decade, even though in nearly every single instance there was another bidder who did not default and was willing to offer Gigabit service.

A “next in line” approach would be a step in the right direction but wouldn’t go quite far enough. Bidding in the RDOF was unusually aggressive. The bidding was so aggressive that 3,216 bids were placed at the lowest permissible level of funding, just 1% of the reserve price, by bidders who agreed to provide Gigabit service. 2,393 census block groups were awarded at 1% of the reserve price. At that level, funding amounts were typically just pennies per home passed, and in all cases, less than $2 per home passed per month.

This figure bears repeating. Thousands of winning bids were placed to deliver Gigabit service for a subsidy of less than $2 per month. One might wonder why any company would be willing to take less money than the cost of regulatory compliance. For that matter, why isn’t Gigabit service already being provided if so little public funding is necessary?

Such bidding behavior is evidence of predatory bidding, whereby the bidder is motivated more to block a competitor than to meet the FCC obligations.

Let me provide a specific example to illustrate the issue. Just southeast of Columbia, SC, there is an electric cooperative called Tri-County Electric, which serves just under 18,000 of its member-owners. The cooperative is located in Congressman Clyburn’s district. Jim Clyburn has been an eloquent and passionate advocate for rural broadband and encouraged the electric co-ops in his district to serve their members with broadband. He is the leader we need in rural broadband. Tri-County’s members are largely unserved by broadband as indicated in the map below. 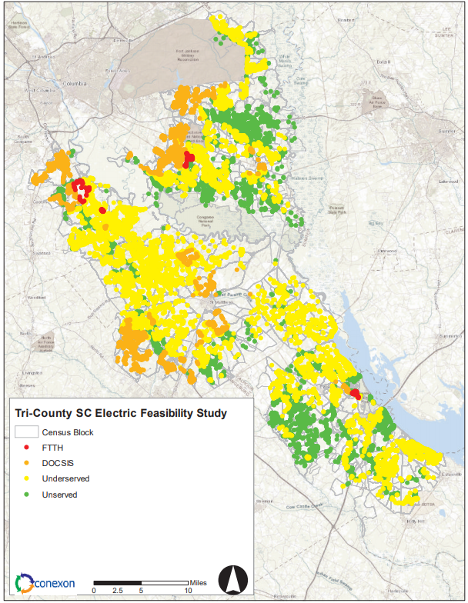 Every dot in the map is a location of a Tri-County member. Yellow indicates a lack of broadband. Green indicates a lack even of 10/1 Mbps DSL service. Orange indicates the presence of cable broadband provided by Charter. Red indicates a claim by a telephone company, such as AT&T, that it has fiber available, though it likely does not. This data is drawn from the FCC’s 477 self-reported carrier data, which generally overstates broadband availability.

Tri-County Electric Cooperative has done everything you’d wish a rural electric cooperative would do. Stepped up, in the midst of a pandemic, to solve a problem not of its making with community-owned essential infrastructure. It really is like the 1930s rural electrification movement, this time with broadband.

The data in the map above is the same data the FCC used to determine areas eligible for RDOF funding. Within the Tri-County service territory, the FCC calculated that over $13 million would be needed in subsidies to build and operate a fiber network to the homes and businesses. $13 million would have eased the financial burden on Tri-County.

Tri-County participated in the RDOF auction. As mentioned above, the auction bidding was unusually aggressive. Charter, in particular, placed a bid in Tri-County’s territory for just over 6 cents in funding per month per home to deliver Gigabit service to all the homes and businesses in Tri-County’s service territory. 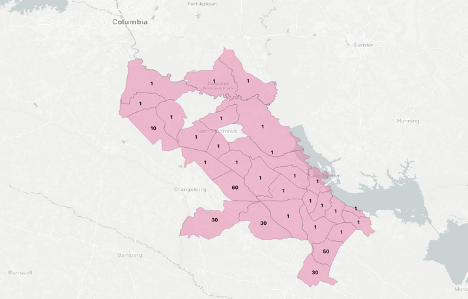 Above is a map of Charter’s bids in the Tri-County service territory. The number in each census block group displays the percentage of the reserve price in Charter’s bids. A 1% bid translates into pennies per month per home of RDOF funding.

Pennies per month per home for Gigabit service was how Charter bid. Though Tri-County won a few census block groups, it dropped out of the bidding in most of its service territory when the bidding dropped nearly to nothing, and Charter “won” those block groups.

Here’s the kicker. Under the RDOF auction rules, Charter can meet its build-out obligation in South Carolina by serving other parts of the state and simply give up the 6 cents per month eight years from now without ever building in the Tri-County service territory.

I started working in the broadband industry in 1995. I have been involved in FCC auctions since 1995. I have never seen bidding behavior like that which occurred in the RDOF auction. The behavior of some bidders was baffling. The behavior of others was predatory. I have described one example above, but there are scores of similar examples. They are examples of a flaw in the FCC’s auction design and implementation.

I suspect many such bidders will ultimately default on their promises, and depending on when the default occurs, the penalty will be as little as foregoing the pennies per month subsidy. I would prefer such defaults occur quickly, but only if the FCC acts quickly to put public money to work building fiber networks.

I think the FCC should encourage quick defaults by offering forgiveness now or severe penalties later. Then, I think Congress and/or the FCC should adopt the following to fix the flaws:

1. Offer the award of RDOF funding for census block groups to the penultimate bidder in each block group.

Next in line. Recalculate bids. The current data makes it all calculable and within the FCC’s RDOF budget.
Fix the RDOF now.

Conexon works with Rural Electric Cooperatives to bring fiber to the home in rural communities. The company is composed of professionals who have worked in electric cooperatives and the telecommunications industry, and offer decades of individual experience in business planning, building networks, marketing and selling telecommunications. Conexon offers its electric cooperative clients end-to-end broadband deployment and operations support, from a project’s inception all the way through to its long-term sustainability. It works with clients to analyze economic feasibility, secure financing, design the network, manage construction, provide operational support, optimize business performance and determine optimal partnerships. To date, Conexon has assisted nearly 200 electric cooperatives, nearly 50 of which are deploying fiber networks, with more than 200,000 connected fiber-to-the-home subscribers across the U.S. Overall, the company has secured more than $1.3 billion in federal and state funding for its clients across the country.