At the end of the year, the FCC released data that it knows to be inaccurate, which will damage the lives and livelihoods of millions of our fellow citizens who live and work in rural America. In its publication of eligible census blocks for the Connect America Fund (CAF) auction, the FCC excluded 432,302 rural homes and businesses in areas that previously had been eligible to receive public support for broadband service.

The vast majority of these areas had been determined by the FCC and the telephone industry to be too costly for the telephone companies to serve with broadband – even with subsidies – so the FCC initially decided to auction financial support for these remote areas. And yet, in the closing days of 2017, the FCC removed 30% of all the eligible rural locations from the CAF auction by applying the filter of newly released data on the availability of broadband service.

The FCC is relying on data that purports to show that, between June 2015 and December 2016, broadband was newly made available to some of the most remote areas of the country covering 432,302 locations. And that all this new rural construction occurred without any federal universal support or any obligation to provide service.

Of course, no such thing happened. It is fake data. 432,302 rural homes and businesses now have phantom broadband service.

Below is one example of how this decision will play out in one rural community. The first map shows high cost areas in a rural Missouri county, shaded in red, that had been listed as eligible for universal service support. These are areas that have never received broadband funding from the FCC, and were previously scheduled to be eligible for funding in the CAF auction because no ISP reported offering broadband service. 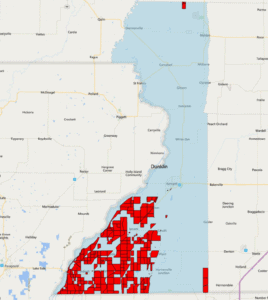 And now, the FCC’s newly released data show only the following areas as eligible for the CAF auction. The reason for the change? From June 2015 to December 2016, broadband was reported as newly available in the rest of the areas colored red above. 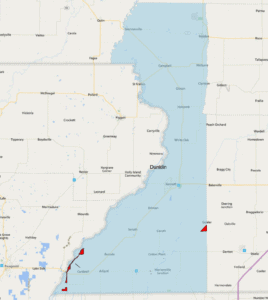 The FCC would have the residents of Dunklin county believe that only three locations in the entire county are without access to broadband. That is the sum and substance of the FCC’s rationale for excluding these areas from the CAF auction. Across the country, the FCC wants millions of Americans living and working at hundreds of thousands of homes and businesses to believe they have broadband, too. Even when they don’t.

The FCC’s reliance on data that show only three homes in Dunklin county, Missouri without broadband brings to mind a famous quote: “I come from a state that raises corn and cotton and cockleburs and Democrats, and frothy eloquence neither convinces nor satisfies me. I am from Missouri. You have got to show me.”

What is the data that the FCC is using to make such a critical decision? The self-reported Form 477 data from ISPs regarding their maximum advertised speed in each census block where they provide service. When I was at the FCC, not a single economist who worked in my group believed the data to be accurate or reliable. The FCC’s misapplication of the data in the CAF auction will have consequences for millions of rural Americans.

The infirmities of the FCC’s methodology include:

Perhaps something else occurred that better explains the most recent change in the data. Between June 2015 and December 2016, the FCC decided that it would exclude from the CAF auction funding to competitors of large telephone companies, but only if those telephone companies reported offering 10/1 Mbps service.  And then, like magic, 30% of the most remote areas of the country were newly reported to have access to 10/1 Mbps service, without any funding at all.

There is a simple fix to the problem that wouldn’t require a new challenge process. The FCC could use the same broadband data it used previously to make a $10 billion funding offer to the large telephone companies. At least that data went through a limited challenge process.

When I worked at the FCC, the Chief of Staff once admonished me to stop treating everyone at the FCC as if they were stupid. I think I simply treated people as if they should know better, but maybe I wasn’t always very tactful. To be clear, I don’t mean that the FCC has made an unwitting error; their decisions are being made with knowledge and intent. Chairman Wheeler didn’t care for the universal service programs, or rural America for that matter. But Chairman Pai? He grew up in rural Kansas and still has family in rural Missouri. He should know better.

Jonathan has worked for over thirty years at start-up telecommunications companies and in the U.S. Government. Prior to joining Conexon, Jonathan served as Chief of the Office of Strategic Planning for the Federal Communications Commission. Jonathan was part of the senior leadership at the FCC that reformed $12 billion in annual federal spending, including the rural and high cost fund, e-rate, telecommunications relay services and the lifeline programs. For the majority of his career, Jonathan has worked with companies building broadband networks. Jonathan left the FCC to help electric cooperatives bring fiber-to-the-home (FTTH) broadband to rural areas throughout the country.